Posted at 14:41h in Where To Eat On Hilton Head by Staff Writer

Today, we are talking about finding the best Fish Tacos on Hilton Head! I know what you’re thinking, but before we dive in let’s look at a little history of this famous delight!

It should be an opportunity to enjoy a delicious meal in a great atmosphere with dear friends, family members or loved ones. Hospitality should be gracious and welcoming. At SERG we have many different restaurants but the characteristics are always the same: precise attention to details, exceptional service and great execution. 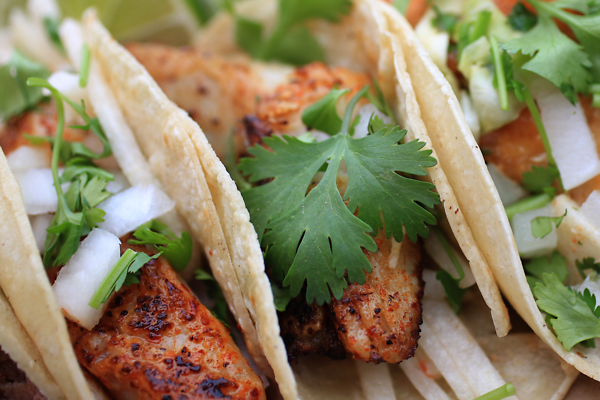 The other day a great friend and former college classmate joined me for dinner. He is obsessed with food in all its glories from origin to sourcing and preparation. He is a food writer, travel editor and blogger. Of course we talked about food: that’s what we do when we get together. Not just eating. Not just dishes. We have passionate beliefs, so it always goes farther. Food is not just survival. With it we connect with family, make friends and count our blessings.

To “break bread together” (a phrase as old as the Bible) captures the power of a meal to forge relationships, bury anger and provide laughter. Food also brings people from different cultures together. It is a fantastic vehicle for learning about people with different backgrounds. Food is part of your family history and who you are and it’s the same with the people you meet. It can create memories that last a lifetime.

If You Just Want To Jump Ahead To Our Best Fish Tacos On Hilton Head List With No History, Here Are The Spots: (Yes, We Are A Little Partial)

As our dinner progressed, we talked about great food experiences, some that we had shared. We remembered a day many years ago when we experienced our first fish taco in sunny Southern California. We were young, the beaches were alluring, the sun was just right. My friend waxed melodic. That fish taco was “more magical than a dolphin leaping over a sunset.” (I warned you that we are food obsessed.)

I have been back to Southern California many times. My friend even more. He then proceeded to say, “The fish tacos in San Diego and Los Angeles are without question the best in the United States.” That definitely caused me to pause, think, gather my thoughts. I had to keep this bloodless as we are lifelong friends. Then I said, “Actually, Hilton Head fish tacos are beyond compare – they are the best of the best.” “Heresy,” he jokingly said, “Explain.”

First some historical perspective. The first fish taco was born 15 miles south of downtown San Diego in Baja California, Mexico, in the 1950’s but its origins are even older.

People have been eating fish tacos in the coastal areas of Mexico for as long as indigenous fishermen have worked the seas and have had stone ground corn tortillas to wrap the fire roasted bounty in – possibly thousands of years. The Pacific coast of Mexico, especially Baja California, that rugged peninsula that juts southward into the sea, is the cradle of the fish taco.

The Mexican peninsula has also seen the influence of 16th century Spanish invaders (think wheat, flour tortillas) and Asian fisherman and traders who are thought to have introduced the local people to the method of deep frying fish.

The Baja is known for its huge variety of seafood, as it is basically one long coastline. Think marlin, dorado, squid, shrimp, crab, swordfish, tuna, etc. Baja California is home to the humble origins of the fish taco and (arguably) to the caesar salad and margarita.

In the 1950’s, in Ensenada and San Felipe, Baja street vendors began selling fried fish on traditional hand made tortillas, topped with cabbage, pico de galla (tomato/onion based uncooked salsa) and creamy sauces to the fishermen and customers of local markets.

A wave of Japanese fishermen made their way to Ensenada during the 50’s and 60’s to take advantage of Baja California’s cold water currents and variety of fish. And they also brought with them some of their food traditions such as the tempura style of battering and frying fish. 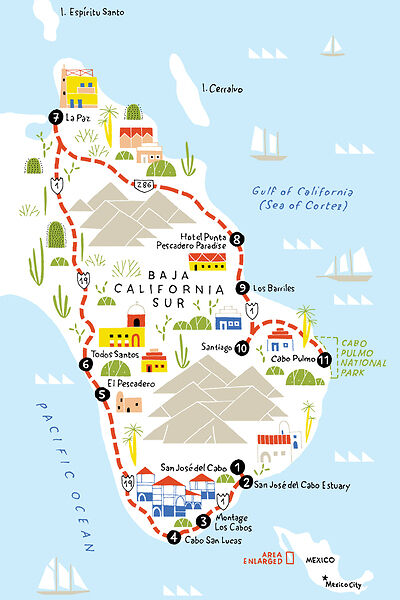 The Cradle of the Fish Taco

It’s Always Been About Beer & Tacos…

Surfers and college kids discovered the local dish and one surfer in particular decided to bring the concept back home with him. In 1974, while on spring break from San Diego State University, Ralph Rubio and friends visited Baja California. In addition to cerveza, fish tacos at local stands were their main sustenance. Rubio especially liked the fish tacos at a stand in San Felipe run by a vendor named Carlos.

One night, after consuming many Coronas, Rubio suggested to Carlos that he should move to San Diego and open a fish taco stand. Carlos did not want to leave Mexico, but provided Rubio with his recipe (though he did not specify the exact amount of ingredients). Rubio returned to college, and over many years tinkered with the recipe until he felt it was right. 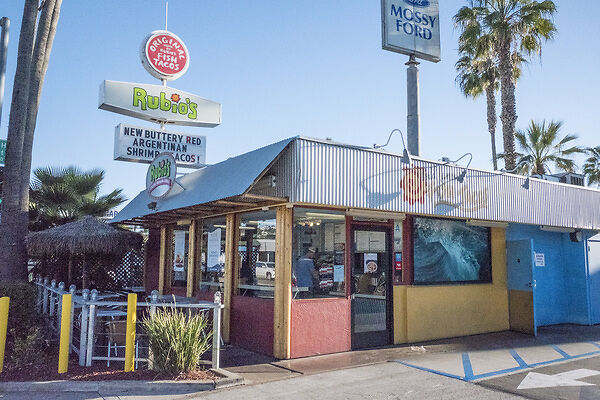 By 1983, he opened a restaurant in a failed hamburger stand in the Mission Bay neighborhood of San Diego. Rubio’s became a multimillion dollar business (named Rubio’s Coastal Grill) with over 200 locations across the U.S. including California, Arizona, Colorado, Nevada and Florida.

It is still operating today and remains under the ownership of Ralph Rubio. Rubio actually returned to San Felipe in the 80’s seeking out Carlos to give him some money.

However, he was no longer at the stand in San Felipe and no one knew his whereabouts. The stand was open, though, under new ownership, and it remains so at the present time.

The Baja style that Rubio so enjoyed and developed consisted of a chunk of fried fish, cocooned by a warm corn tortilla, crammed with crunchy cabbage, cream sauce, a sprinkle of salsa and a spritz of fresh lime.

Done right, the filling fish taco is a symphony of contrasts – hot and cold, crunchy and soft, spicy and soothing.

Those of you who have never sampled a fish taco would be wise to cut their teeth at one of our SERG Group restaurants where the fish tacos will never disappoint. At a SERG restaurant we believe that when food is prepared with quality ingredients, great experiences happen. When you eat one of our fish tacos, you can be assured that you will have pristine, fresh quality fish, crisp to the snap vegetables, luscious crema and zesty salsa. Of course they always include a tantalizing smell and a satisfying taste.

Why do we have the best fish tacos? Let me count the ways. And, yes, I can hear my Southern California friends saying that an east coast fish taco does not exist. Anything we do is not enough. A fish taco must be sold from a shack misted with Pacific spray and approved by the surfboard-toting, shorts-clad affectionados of Baja California. 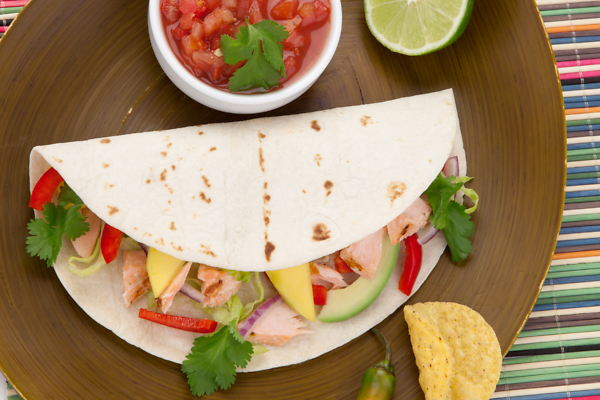 Remember, the fish taco is supposed to be everything to all people. At SERG, we recognize that it is the fusion of highbrow and lowbrow eating. Casual but thoughtful.

Simple but deep. Is there an authentic Baja style fish taco unless it borders the Pacific? Authenticity exists (if it exists at all) on paper.

If you ask a hundred people in South Carolina what their recipe for rice and beans is you will probably get one hundred different recipes.

A delicious fish taco is anything you want it to be. It can borrow from innumerable cooking traditions and be exemplary as long as it has quality ingredients and professional execution. That’s what we do at SERG.

Each restaurant has their take on the fish taco, and, taken in totality, every craving is met. Poseidon Coastal Cuisine’s strength as an eatery comes from its variety. 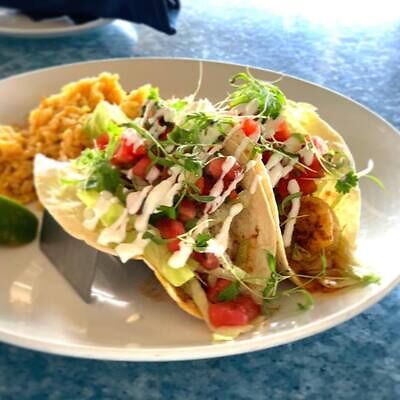 Want something different? Try Marley’s Shrimp Shack: the earthy, smoking flavor will take your fish taco to a new level. 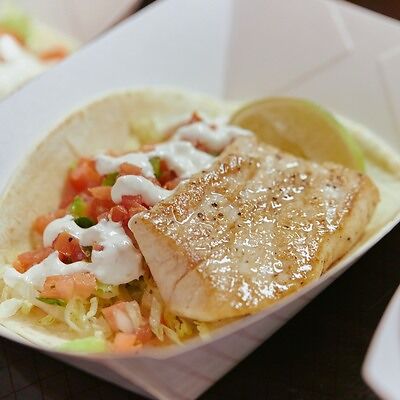 Variations, variations! The traditional Baja sauce is a combination of mayonnaise, sour cream, lime juice, sriracha, cilantro and honey. Staying close to those ingredients, we have our Boathouse Baja sauce. The aim is to enhance the flavor of the fish, never to distract from it.

To be candid, there are a lot of “gloppy” sauces out there, but not at a SERG restaurant. Try a fish taco at Skull Creek Boathouse and see what a well prepared Baja sauce tastes like. 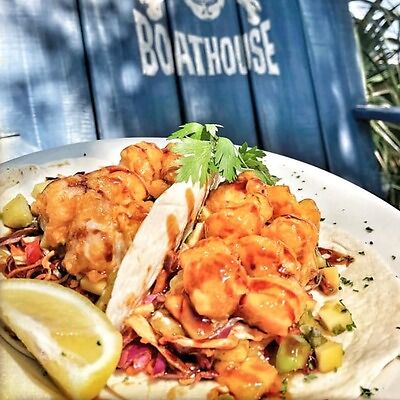 Fresh, fresh, fresh – the key to a great fish taco. That means fresh fish delivered from the dock everyday. Not many California restaurants ever offer a seared fish taco. It’s such a delicate balance between juicy and dry. Dockside has definitely struck the right balance, your Ahi Tuna is in good hands. 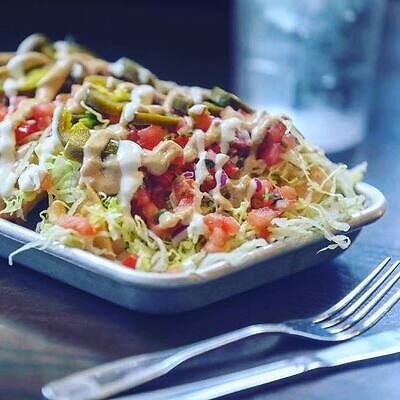 Frying can seem deceptively simple. When done right, a diner might think that’s all there is to it – easy. But when it’s done wrong, the diner wonders what happened. You will be surprised how many taco stands in Baja California and spots in San Diego have not mastered frying technique. There are only a few parts to frying fish: the breading, the oil and the cooking temperature. One miss, and the final outcome can ruin a fish taco.

Our fish are fried to perfection through expert execution. As an example, the Baja Tacos at the Black Marlin are true to the early tempura style: lightly breaded flounder fried so that the taste and the texture of the pristine fish shines through. A nice crunch, with a moist interior. The fried fish in a SERG fish taco will never disappoint. 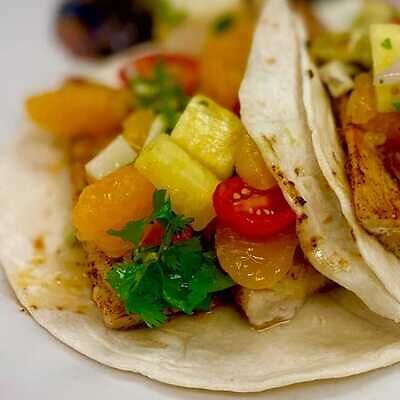 It’s all in the technique for a delicious, grilled, fresh taco. At Marley’s Island Grille we don’t hide behind the batter and the breading.

Everyday we turn out perfectly grilled fish for your fish taco. If you want an extra treat, try our mesquite grilled Mahi Mahi: a meaty, hearty fish, made light and flaky with the right execution. 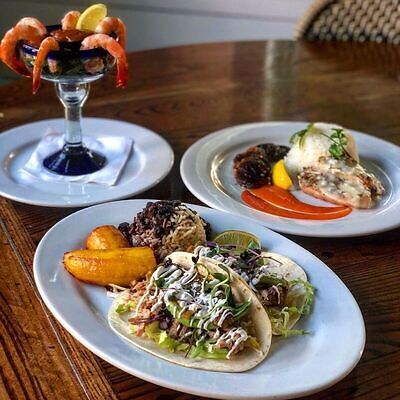 No rule books! Holy Tequila’s fish tacos are not rigid by definition. Blackened fish, if not done right, can be the taste of disappointment. But, no worries! At Holy Tequila the blackened Mahi Mahi brings out the subtle flavor of the fish.

Finally, everything is enclosed in a freshly made flour tortilla. The “original” Baja style fish taco utilized a corn tortilla.

We have found that the flour tortilla complements all our bountiful tastes and holds up well with our sauces and salsa. But, if you do seek a corn tortilla then head over to Holy Tequila. We always offer that option! 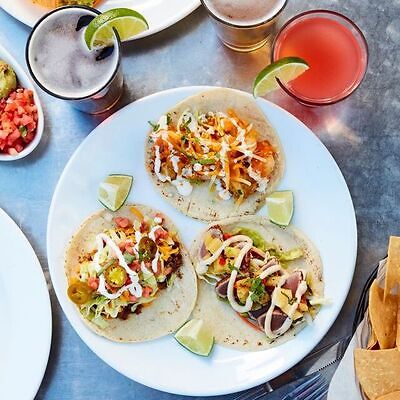 There is strength in numbers and that allows us at SERG to offer our patrons multiple choices of fish tacos. But large numbers require discipline and execution. Try a SERG restaurant fish taco – we are the best of the best in crunchy hot, cold, tender, moist and creamy satisfaction. This is our promise,

It’s still summer! What’s better than a briny taste of the sea? Maybe even some decadence – indulge in a lobster taco with all its sweet richness and the wonderful addition of a magnificent Riesling….yes, you can, at the Black Marlin! We at SERG believe in accessible creativity – delicious twists on classics.

Hope to see you soon!

If the time comes that you can venture out to other states, we have compiled a short list of our favorite spots for a great fish taco. We aspire to be the best and these stops have the same aspirations. 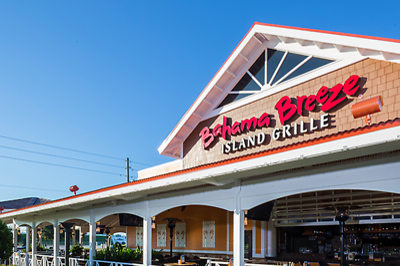 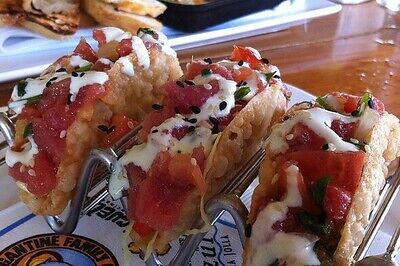 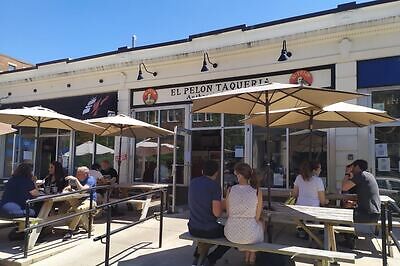 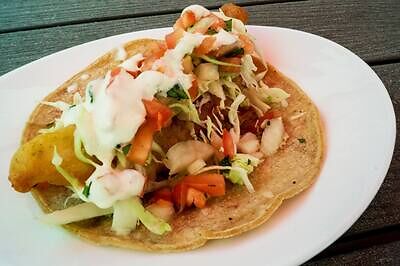 MARISCO’S GERMAN
– Escondido, California –
Sometimes it is great to be stuck into Baja style if you have fresh ingredients and great technique. 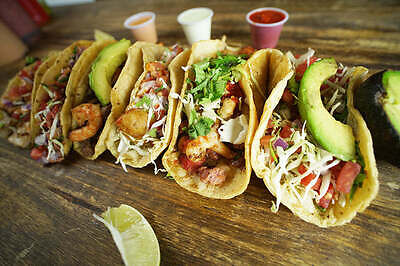 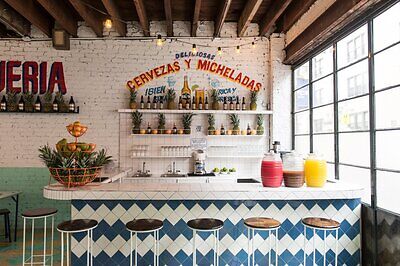 TACOMBI
– New York, New York –
If you have standards, you can do a wondrous fish taco in Greenwich Village. Marinated fish, chilis, achiote. 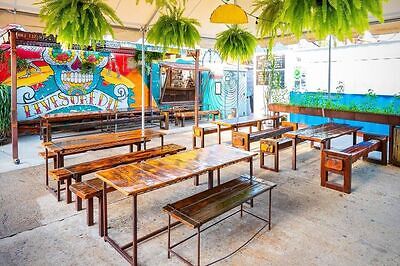 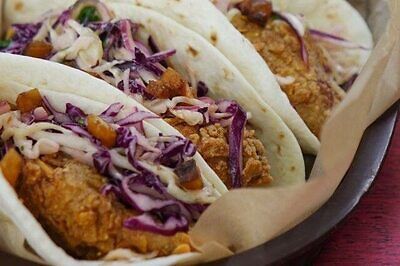