Where Did Hushpuppies Come From

24 Feb Where Did Hushpuppies Come From

Posted at 18:11h in Food History by Staff Writer

Do you ever wonder about the origin of those little southern bites of heaven known as hushpuppies? We are here to help.

At SERG Restaurant Group we are proud of our hushpuppies and believe they are the best on Hilton Head and the surrounding Lowcountry. Yet even we were not quite sure where these fluffy balls of yumminess got the name hushpuppy. And where did they originate?

We decided to do some digging but never realized that we would plunge down a big old rabbit hole when we started looking for the origin of the hushpuppy. 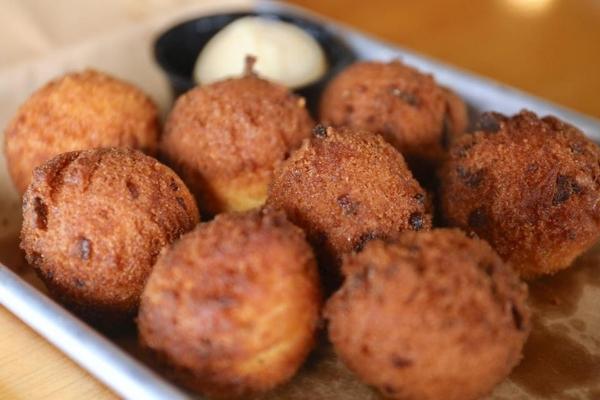 Sorting myth from reality is a thorny job when it comes to the origin of the hushpuppy, though it stands to reason that its progenitor dates back to southern North American food practices. It is well known that indigenous societies from Mexico and Central America boiled and ground corn for the making of tortillas. Likewise, native Americans cultivated maize crops and the resulting corn was either lined with alkaline salt to make hominy or ground into cornmeal. Southern tribes, such as the Cherokee and Seminole, would grind up corn which would then be boiled. Of course, these working techniques did not produce what we think of as a hushpuppy, but we can reasonably assume that they were forerunners of cornmeal batter dropped by the spoonfuls into hot grease until crisp and golden brown.

Cornbread and fried bread have been around for centuries. The cornbread was popular during the American Civil War period because it was cheap and could be fried for a speedy snack or made into fluffy, high rising loaves. Fast forward native cornbread to today’s Southern cuisine and you have the tasty little spheres we are accustomed to pairing with deep-fried fish and seafood platters.

So where did the name originate? You can search the internet and find an array of possibilities. But as the noted southern food writer Robert Moss has written, “…Which isn’t to say that people haven’t tried to explain the origin of the hushpuppies. Plenty has. The problem is that no one has really tried hard enough.” 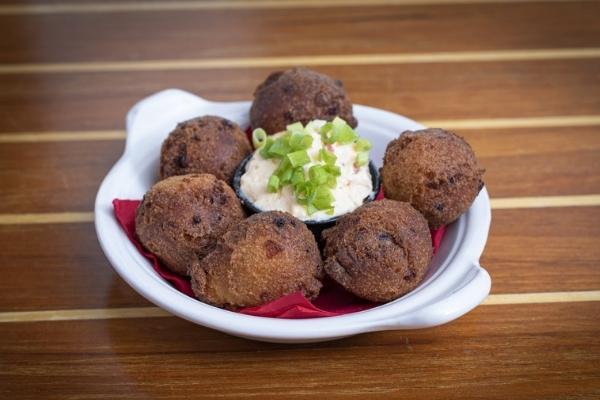 The most common account is that when people on fishing trips would begin to cook their catch their hound dogs would wail and bay in expectation. The cooks would fry bits of dough and toss them to the dogs to hush them. We guess this can be believable but, as Moss points out, it is never explained why hounds were brought on a fishing trip.

It Was During the War

There’s a perpetual inclination when writing about Southern dishes to tether everything to the Civil War (cornbread and boiled peanuts, for example). In the instance of hushpuppies, the tale goes that Confederate soldiers were preparing food around a campfire and heard Union soldiers in the vicinity, so they pitched their yelping dogs some fried cornmeal cakes and ordered them to “hush puppies.”

How About an Old Mammy

If you’re making things up and not researching, why not lob in a few repulsive African American stereotypes? One persevering narrative asserts the dredgings remaining after battering and frying fish were sent to the slave quarters where the women added a little milk, egg, and onion and fried it up. The aroma led hungry children and starving dogs to whine for handouts and Mammies would give out spoonfuls saying, “hush childies, hush puppies.” Apparently, they had to scrimp on cornmeal but had plenty of milk and eggs laying around,” says Moss satirically.

In this account, it took the culinary artistry of the French to enlighten Southerners on how to fry cornmeal batter. In the 1720s, French Ursuline nuns freshly arrived in New Orleans utilized cornmeal from the local Native Americans and fashioned hand-shaped fritters that they named croquettes de maise (that is, corn croquettes). From there, the croquettes allegedly spread throughout the South though this yarn doesn’t say where and how or why the name never took hold (if they were so popular).

This probably is the most outlandish story. Cajuns in southern Louisiana used to batter and fry salamanders (aka mud puppies). It is said they were called hushpuppies because eating such lowly food was not something a southern wife would want her neighbors to know so they kept “hush about it.” According to Moss, “…it’s a shame that none of the writers who blithely repeat these tales see fit to dig into the historical record and try to substantiate them.” Most writers will repeat a few of these clashing stories, knit their brows, and finally, say “who knows” (but of course they will have a recipe).

Actually, there is a real story and it is much more interesting and illuminating than a boatload of balderdash about soldiers, nuns, and barking dogs. And it began along the banks of the Edisto River in the Midlands of South Carolina. 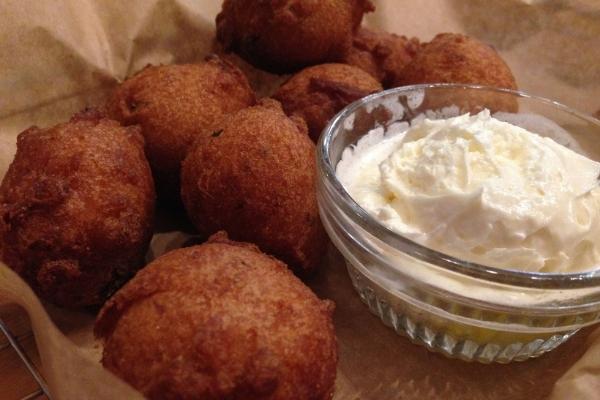 Around the turn of the 20th century, guests at South Carolina fish fry were introduced to a spanking new delectable dish called red horse bread.

No, it wasn’t red in color and it wasn’t served to horses to stop them from neighing. The name pertains to a species of fish, a river fish, just like catfish, bream, black bass, and shad. They were caught by South Carolinians and used for fish fry.

In the early years, the unquestioned star of the Edisto fish fry scene was an African American man named Romeo Govan. Born into slavery in the 1840s, Govan married Sylvia Jennings shortly after Emancipation and they moved to a small parcel of land on the banks of the Edisto River about five miles east of Bamberg, SC. They remained there for the rest of their lives.

Originally, they leased the land and farmed it, but eventually, Govan began complementing his earnings by holding fish fries for local civic clubs and political organizations. By the time of the 20th century, he erected what he called his clubhouse, a frame building with an expansive backyard where guests could eat “fish of every kind, prepared in every way!!” As a side dish, he served what The Augusta Chronicle reported, in 1903, as “…the once eaten, never to be forgotten, Red Horse Bread.”

The Bamberg Herald remarked that Govan’s renowned bread was “made by simply mixing cornmeal with water, salt, and egg and dropped in spoonfuls in the hot lard in which the fish had fried.” The components might have been commonplace, but the accounts of Govan’s Red Horse Bread make clear that the guests found it to be a new delicious treat.

By 1908, Govan was holding fish fry almost every day of the fishing season. They were attended by governors, attorney generals, bishops, political candidates, and every manner of other patrons, Northern and Southern alike. As Moss remarks, he never asked for payment directly, but the tips he received from these fish fry allowed him to purchase the land using cash in 1910.

Romeo Govan died of Bright’s Disease in 1915, but his gifts as a cook served his family well, as his wife lived comfortably until her death in 1924.

Red Horse Bread remained popular after Govan’s death and became a staple at South Carolina fish fry. There is some belief that Govan conceived the name himself since all mentions in newspapers are associated with one of his fish fry. To this day, some old-timers in the middle region of South Carolina continue to call hushpuppies Red Horse Bread. 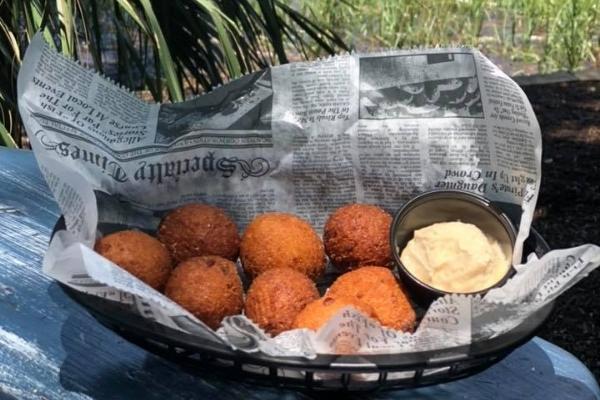 From Horse to Puppy

South Carolinians were not the only ones to hit on the joys of frying cornmeal batter in fish grease. Comparable creations could be found in Georgia and Florida, but they were called by different names. A fishing columnist wrote in The Augusta Chronicle, in 1940, that “Red Horse Cornbread is often called hushpuppies on the Georgia side of the Savannah River.”

By the early 1930s, hushpuppies were regularly being served at political gatherings in Tallahassee, Florida, including a rally in May 1931, at Wakulla Springs where, as Moss describes, “the spread consisted of several hundred pounds of mullet fresh from the Gulf and other fish fry delicacies including hushpuppies.”

Moss calls the derivation of the name an “absurd conjecture” suggested merely by the sound of the word. Most tales seem to have started with the name itself and then spun a yarn of how the food might have come to be called that. People like an interesting origin story and food history is filled with tall tales, and that’s probably what happened with hushpuppies. But here’s the rub, not only were people frying cornmeal batter long before they called it a hushpuppy, they were using the word for other things not connected to a fish fry.

Originally, “hushpuppy” was a colloquialism for silencing someone or covering up misdeeds. The term was used well into the 20th century. Newspaper accounts of the Teapot Dome Scandal in the 1920s voiced indignation at the Harding administration’s “hushpuppies” method of permitting the scandal to thrive.

Fried cornbread batter wasn’t the first food to be called “hushpuppy” either. The term was also used as a moniker for gravy or pot liquor. A story in The San Antonio Herald, in 1879, noted that a group of Texas Rangers had a campfire breakfast that included a pan of “hushpuppy gravy.”

Nobody proclaimed that this gravy was thrown to dogs to hush them, but it was said to have muted dogs of a different sort.

A senator from Mississippi (H.H. Casteel) expounded in a speech in 1915 that pot liquor in his part of the country was known as hushpuppy because it kept the “houn’ dawgs” from growling. It seems that the Senator was describing the growling in a diner’s stomach and there was a much better use of pot liquor than throwing it to the dogs.

So what is Moss’s take on the origin of the term hushpuppy? He suggests that the term is likely a euphemism for stopping the dogs in your stomach.

The story of the hushpuppy is an example of truth actually being more interesting than fiction. As Moss concludes, “And so there you have it. It may not be as cute and dramatic as panicked soldiers or plantation cooks trying to silence a pack of dogs, but the true story of hushpuppies has more than enough twists and turns to make it compelling.” 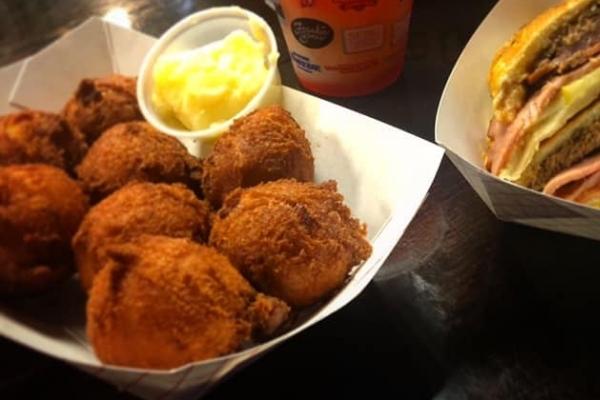 A hushpuppy is a simple treat – thick cornmeal batter dropped in spheres (or nuggets or fingers) into hot oil and fried till crunchy and brown. But this deceptively simple food is far greater than the sum of its parts. It is a quintessential Southern delicacy, something diners south of the Mason Dixon line (and lately above) would not want to do without.

Have a craving for some hushpuppies? You’re in luck, the following SERGE Restaurants serve the best hushpuppies on Hilton Head Island and the surrounding Lowcountry!

One Warning! After feasting on our hushpuppies we cannot be responsible if you end up howling for more.